Sydney Gay & Lesbian Choir is a non-auditioned choir which welcomes members regardless of their sexual identity or musical experience. The choir is open to all – lesbian, gay, bisexual, transgendered, intersex, queer and our straight allies. What unites us is a love of singing together and striving for performance excellence. A powerful symbol of diversity, inclusion and harmony, the choir has maintained a vital and visible presence in the history of Sydney’s LGBTQI community.

Sydney Gay & Lesbian Choir has provided the soundtrack to countless community events and celebrations over the years, and has regularly represented Sydney on the national and international stage. Our repertoire is equally diverse, ranging from classical to pop, and from music theatre to contemporary Australian compositions. With around 80 active singing members at any time. We usually present two major concerts each year, as well as performances at a wide range of community events, interstate and international festivals, collaborations with other artists, recordings and fun social events.

Sydney Gay & Lesbian Choir held its first ever performance in 1991, following a letter published in the Sydney Star Observer in November 1990 which called for community interest in forming a choir. Over 25 years later we’re still going strong and looking forward to our 50th Anniversary! 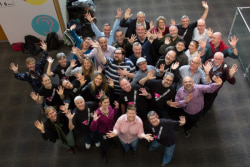