Rod Bower is an Anglican priest, Rector of Gosford where he has served for 19 years and Archdeacon for Justice Ministries and Chaplaincy in the Diocese of Newcastle. He is an ambassador for the Refugee Council of Australia and serves on the board of the Samaritans Foundation.

Rod is a passionate advocate for a number of social justice and human rights issues, including marriage equality. He believes that our treatment of Asylum Seekers, the lack of action on climate change and the failure to adequately recognize First Nations people damages our communal soul.

It has been said the he takes “a hard line on compassion”, he is committed to building social and cultural capital and contributing to the evolution of an Australia where there is respect, peace and harmony. Rod is married to Kerry, also a passionate advocate for Asylum Seekers; they have two married children and four grandchildren.

Rod was a finalist nominee for the 2018 Australian Human Rights Medal, he received the 2016 Doha International Award for Interfaith Dialogue and was named Abyssinian of the year by the Muslim Community. He is the author of ‘Outspoken’. 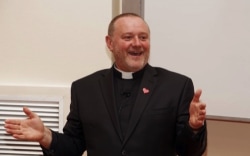