Jonathan grew up in a committed progressive Jewish family and always wanted to be a Rabbi. He went to a large orthodox Jewish day school, because it was the only choice in Jewish day schools and had excellent engineering facilities! There he began to experience orthodox Judaism, which reinforced for him the values of his own progressive tradition!

He spent two years studying Production Technology before working in industry as a stores and systems manager and buyer, first in plastics, then furniture. He was accepted for the five year Rabbinic training, which included time in Jerusalem and Sydney, Australia. Apart from Israel, one of the most significant influences on him was the annual Jewish Christian Muslim conference which was held in Germany.

After ordination in 1988, Jonathan worked at the Hertsmere Progressive Synagogue near London for 15 years. He was involved in developing a pluralist Jewish state school sector with primary schools and eventually the Jewish Community Secondary School.

Jonathan has also become heavily involved in environmental work, constructing an underground home in London and running a car on compressed natural gas, charged up every night from the mains. In Australia he built a ‘Seven Star Energy- and Water-Efficient showhome’, and established JECO, the Jewish Ecological Coalition.

Jonathan was also instrumental in establishing the Jewish Christian Muslim Association of Australia, which runs residential conferences, schools programs and other events. In 2007, Jonathan spoke at an interfaith seminar in Canberra with the Dalai Lama on ‘Paths to Peace’, and also gave his first gave a keynote lecture for the Common Dreams conference in Sydney.

He moved to Australia and took up current position January 2003. He serves a congregation of about 300 households in Melbourne, a part of the Union for Progressive Judaism.

Personal statement: I believe in putting prayer into practice. I am interested in faith frameworks for modern life, and my studies, talks and meetings with others have persuaded me that those of us who consider ourselves ‘religious’ have an enormous amount in common, as well of course as important differences. I firmly believe that we must learn to live together with interest and respect for, and indeed celebration of, difference and diversity. We pray to the same God, who created this magnificent diversity. I also believe that God put us on earth as caretakers of creation – and we have done a pretty poor job recently and are fast running out of time! Hence, I see it as our religious obligation to resolve the difficulties and problems our world faces. 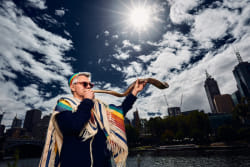