Jason is a Uniting Earth Advocate and a minister in the Uniting Church in Australia. After graduating

from zoology with honours, he converted into an Evangelical church where he pushed for a more literal

approach to Genesis, before entering theological college and back-flipping. With a life-long passion to

help animals, he has spent his ministry helping the church and others reflect on what it means to live

well on Earth, and to do something about it. Which wasn’t quite what he had planned, but he has been

the forest with his family where they try to be good neighbours to the other animals around them.

A PhD on Biocentric Theology began shortly into his ministry, as he moved from being a safely married

heterosexual advocate for the church to rethink its views on sexuality, especially homosexuality, to a

separated minister with a new partner. Some of his doctoral thesis turned into a poem, which turned

into a talk, which turned into a book on the evolution of sexuality, and implications for faithful sexuality

today.. The poetry bug bit, and a few more might be scattered throughout the conference. You will

recognise them because they sound like Dr Seuss and Pam Ayres had a love child who became a priest. 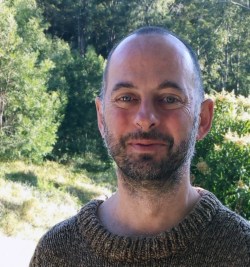