Doug Purnell OAM is ‘living a second life, timeless and wide’ (Rilke).  He has been for all his working life a minister in the UCA in pastoral settings and as a Pastoral Theologian at United Theological College in Sydney.  In his retirement he is pursuing a life goal to work in his studio every day, hoping to make a ‘mature body of work’ that enables people to see God in fresh ways.

C R Foster (theologian and educator): “Your paintings “show a glimpse of transcendence, or God.” Your painting reveals hidden mysteries, but it does not define or postulate that mystery. The viewer, as is always the case when confronted by mystery, only discerns mystery as he or she engages it. And for some viewers of your painting, that requires some work on their part.”

Doug is a pastoral Theologian who is author of four books, as an artist he has had four residencies in the US (3 of those at the Henry Luce III Centre for Arts and Religion Washington DC), accompanied by shows of his work.  And over the past 13 years he has curated 12 Contemporary Stations of the Cross exhibitions with more than 150 leading Australian artists.

His most recent exhibition was ‘Echoes of the Land’ at Sheffer Gallery, Darlington in Sydney  http://www.sheffergallery.com/exhibitions/Purnell/index.html

Doug’s elective - Playing with the idea of ‘cross’ in paint - is a Workshop/Talk. He says about it “I had come back to my studio to work after a successful exhibition.  Making new work was difficult.   I was playing on small boards a little bit bigger than A4 size…  and I was building on a response to a work in my show, that structurally was built around a ‘cross’ shape… so I began playing with the idea of ‘cross’  … only, my theology of ‘cross’ is changing radically… so I wondered, if I just played with the notion or construct of the cross in these paintings might I be helped to rethink my understanding of the cross…  the images that emerged intrigued me and when I looked at the work what caught my attention was how figurative the cross became and how active the figure became… Later the cross became a bird, and later still more ideas emerged. I shared the work with friends and was excited by their responses.”

As an artist, Doug Purnell will construct a small chapel space showing some of his recent work (there will be eight plus paintings).  This will be a space for quiet reflection and meditation, where Doug as artist is offering paintings that open the idea of mystery.

A comment by Sean Scully about abstraction is very apt. “I should say something here about abstraction, about why I make abstract paintings.  I agree with Kandinsky’s view that the depiction of the appearance of the real world somehow obstructs access to the spiritual domain.  And it is that domain that I am trying to gain access to with my paintings.  That is what I am always trying to address and that is why I paint abstractly.” (Sean Scully, Resistance and Persistence.  Selected writings. Merrel, London, 2006, p 21) 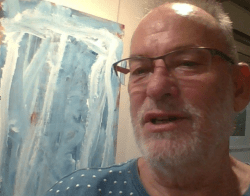